I have to admit, the first time I heard about My Morning Jacket was in an article about miserably-failed digital rights management technology. It was December of 2005 and Sony Corporations BMG business unit was learning that the public does not like evasive technology secretly landing on their computers and opening up their most private files to hackers. BMG had used a nasty bit of software on over 10 million CDs to protect the content from illegal copy and file sharing. However, it all backfired when consumers learned the software was being installed without permission and opened numerous backdoors into their computers where all sorts of neerdowells could snoop around undetected. The CDs using this technology came from some big-name bands like Santana, Alicia Keys and Maroon 5. But another name popped up that caused me some confusion; who the hell was My Morning Jacket?

I soon learned that MMJ was an experimental country-rock group from Louisville, Kentucky. I say, was because the band has evolved into far more than just country-rock. I also learned they have a huge following. This DVD, Okonokos, showcases two nights of live footage shot at the Fillmore in San Francisco during their 2005 tour in support of their album Z.

Unlike so many concert movies, the Okonokos DVD starts quietly with a cute little romp through a turn of the century cocktail party complete with petticoats and a llama. As we leave the dullness of the party we are led serenely through the forest to the actual concert. Beautifully lit and elegantly filmed, the film presents MMJ as an incredible well-rehearsed band with plenty of range. The music is so well recorded that you can play the video in one room while listening to it in another all the time thinking you are listening to a CD-quality recording. Okonokos contains 20 songs and it is sure to be well received by longtime MMJ fans and newcomers alike.

I doubt I will offend anyone by letting on that Deadheads have a new object of desire with My Morning Jacket. Long live guitar solos and unkempt hair! 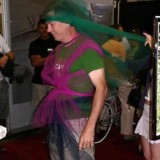 A bit of a turncoat to the second power, Simon entered the music world as a San Francisco punk in the late seventies before moving on to new wave and music/art/fashion writing and publishing in the eighties. Along the way he played a Strat, fingered a Moog and met a lot of prominent musicians. In the very early days of Al Gores Internet he was an executive in a digital rights management company and developed encryption technologies so you couldnt steal music and video. Having recently left the world of high fashion he is back to writing about electronica, trance and Euro pop and downloading music.