Greetings comrades, fellow travellers, supporters, and underground sound revolutionaries of all stripes. The battle lives on, friends. Now more than ever the world needs us to smash down doors using supersonic ghetto blasters with ridiculous speakers and amplification. The hostile takeover of enlightening music on a planet ruled by a tyranny of bland, soulless sound goes on despite setbacks and border closures around the world.

Despite heavy lobbying my music industry giants, my blaster brigade has not yet been labeled a terrorist organization by the United States or other countries. However we have been denied entry into several Middle Eastern and Asian countries, where they fear the power of the boombox in the hands of the people. We also violate noise statues that were originally intended to regulate airplanes and commercial vehicles, so we have not made friends among the ruling elite who value “peace and quiet” above all else.

We have welcomed several new members of our squad including the Brothers Hundreich, an Austrian team of intense audiophiles. Fearless and full of ambition, they have had successful missions hooking up with McGinty in Eastern Europe, blasting Japanese organ music to tourists and locals alike. I assure you they were the toast of Grozny and had the public square rocking like it hasn’t rocked in decades.

In late September I gathered the entire crew at a safehouse in the middle of Istanbul. Black taxis teemed in the streets below us and the waftings of the local kebab house kept all of us hungry and on edge. We sat in a room covered in carpets with nargile, pillows, and brass trays filled with tea and pastries scattered about. DJ EZ-FU sat quietly in the corner replacing the anterior speaker on a sweet custom Panasonic custom job with chrome fittings and double Jensen car stereo amps. I cleared my throat and let the men know about our mission: to bring the best of real American funk and forgotten R n B masters to a people desperately in need of authentic Black American culture. Hip Hop is just starting to take off in Turkey, with most average listeners unaware of the genre’s true roots. 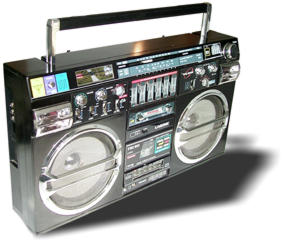 Luckily Stones Throw Records has assembled a compilation of the ultimate sampled tracks, music that instantly jogs memories and moves asses. At high volumes a city can be redefined by 20 minutes of this shit and that’s what we intended to do.

The album features masterful tracks by almost-forgotten artists, whose samples are known but names and complete songs are not. These visionaries of funk put it down 30 years ago and few have risen to challenge the emotional purity and intensity of their funky contribution. Fans of hip hop will instantly recognize many parts of this record, as these might be among the most sampled funk tracks in history. But this is no mere crate-digging excavation, it’s a living, breathing collection of soulful underground funk with ingenuity to spare. Virtually every track will move your ass or your soul. This is raw funk, laid down by groups who never got famous but produced tracks that helped define what it means to live life through music. That in mind I wished my men well and headed out into the streets of Istanbul, solo save my trademark mono-monster sidestrapper blaster, envy of my entire crew. This rig has been known to make men shit their pants from dozens of meters away, excellent for a city of teeming streets, horn-blowing cabs, and 16 million hungry souls. In Istanbul the rich spend their nights in beautiful clubs by the water dancing to Europop, while the common people pack the Taksim (Istanbul’s central square) to laugh, gossip, and munch on shwarma. My mission was to unite the two in an unholy alliance of raw grooves and extremely high volumes.

I parked myself right in the middle of the square, took my stance, and hit “play”. Instantly a massive wave of funk spread through the square and there was an palpable gasp as people took in the monster groove. The funky underground sounds of 1970’s America blasted through the air and ricocheted off buildings, creating a dense wall of sound that Phil Spector would have given his firstborn for. Soon a crowd was around me, gesturing wildly but generally feeling the rhythm. Heads were nodding but through the crowd I saw a pair of jackbooted security officers start to make moves in my direction. Using a clever counter ploy, I started to shake my bony white ass robotically to the rhythm. Wild laughter swept the crowd, but the ice was broken and the old and young alike started to get down, I mean GIT DOWN. A whirling dervish of transcendent funk erupted around me and the authorities were powerless to stop it. I made eye-contact with one of them and gloated silently; we both knew I had won the battle for the hearts and minds of the crowd.

I started walking backwards towards the river and the expensive hotels, cafes and discotechs, a column of newly-minted revolutionaries following. Dancing, jiving, singing, and laughing, we set out to change the world, at least for one night…

I woke up the next morning sore and in a Turkish prison, cold, beaten, but happy and confidant. Sharing underground sounds is in today’s world a ‘security threat’ and a ‘public disturbance,’ but then again, hasn’t it always been? The revolution is on, brothers and sisters, and everywhere my crew and I go, we see that we’re winning the war on conformity and banality. Will you join us? Or will you allow the cheap whore that is corporate pop suck your soul away? The choice is yours.

The Funky 16 Corners is available from Stones Throw Records